Paul & Sarah in Thailand For The Love of Siam

13th – 15th April is when Thai New Year is celebrated, it is called Songkran, also known as the Water Festival. When the temperature hits 40 degrees Celsius and above, it is the perfect time for Thailand’s Songkran Water Festival, to cool down!  The festival starts off on a serious note, importantly by honouring the elders, pouring fragrant water & flowers in their hands…and then… It’s time for the largest water fight across the whole of Thailand for 3 days!

There are are 543 years difference between the Buddhist calendar and the Gregorian calendar.  With Songkran being the start of the New Year.  So 2016 in Thailand the year is 2559!

There have been many highs and some lows along the way, but through it all, we are still Thanking God for His continued guidance. 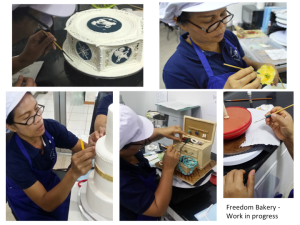 At the beginning of February, the Freedom Bakery, welcomed on board a new trainee.  The new trainee wanted to have a trial period in the bakery to find out if, it was an area that she would like to work in.  It was great for the ladies that graduated last year, to have the opportunity of helping to teach the new trainee.

It made the graduates realise how much they had learned  since joining the bakery last year and how much they were capable of doing and teaching.  At the beginning of April, the trainee took the decision to not continue in the bakery.  This is sad, however it was wonderful to see the graduates from last year step up and see how much they have grown in confidence, ability and skills.  Orders for this year are gradually coming in.  Since the start of the year the bakery team have completed, over 400 cupcakes, a 2 tier character birthday cake, royal iced fruit cakes, a gravity defying noodle cake, cookies, cakes done as presents, amazing realistic sugar flowers, several wedding cakes and a  jewellery box cake with edible jewellery to name a few! 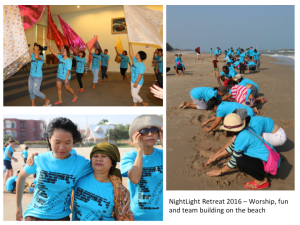 In March, NightLight had its annual retreat.  62 adults and 17 children travelled to a beach location about 3 hours outside of Bangkok.  It was a time for the women to escape from the busy bustle of Bangkok, spending quality time with their children, work colleagues, to worship, team build and have fun!  The women use much of their finances to support their families, therefore many of them don’t get  the opportunity to travel out of Bangkok apart from returning home over the holiday periods, such as Songkran.  So the NightLight retreat is really important to them.

The theme for this years retreat was ‘Breakthrough’; this is the same subject that we have been following in NightLight’s morning devotions for the last 5 months.  The guest speaker was from Scotland, she was not initially in Thailand for our retreat but God orchestrated for her plans to be changed, an answer to prayer since up until about 1-2 weeks before the retreat we had no speaker!

The speaker had no planned message, but God impressed it on her heart to speak to the women about

‘Breakthrough in Forgiveness’.  The message touched many of the women and on the last day of the retreat many of them share the impact the message had on them.  *Yim shared about her years of unresolved forgiveness with her Dad, she thought she had forgiven him, but on hearing the message realised she hadn’t.  She felt encouraged to make the move to contact him.

A lesson for us all to remember: When you reach forgiveness, you break through.  The order is forgive, then break through, because the forgiveness itself is the breakthrough.

Another wonderful breakthrough that happened during the retreat – 2 women gave their lives to Christ on the second day of the retreat!  We rejoiced so much!

There has also been breakthrough in other areas at NighLight:

* Yim (not her real name) Name has been changed to protect identity.

For the Churches we will be visiting we will be aiming to contact you all, nearer to our time of visit to the UK.

Thank you all for your continued support and prayers.

Hi and welcome to our blog. We are long-term mission workers, with BMS World Mission, who are now living and working in Thailand, Bangkok since the end of June 2012.
We hope you will use this site to keep in touch. If you want to receive regular updates, please click on the follow button below.